All You Need to Know About Parti Yorkies & More

Parti Yorkies have been out of the spotlight for a long time and some silly reasons. It’s because they have been considered as non-purebred Yorkies or the ones of lower quality. Nowadays, most people are finally aware that these Yorkies are the same as others of the breed. But still, some are not sure what the word parti presents, how those Yorkies stand out, or whether they have some specific health issues.

The difference between these Yorkies is so slight that you can find yourself asking: “Well, is there a difference at all, or is it just another trick?” If you’re among the confused, say no more – we got your back! In the next few lines, you’ll find all you need to know about Party Yorkies and even more! Let’s begin!

The first and most frequent question is about the origin of the Parti Yorkies. The word parti in their name has nothing to do with their genes or breed. It’s just a sign of their color – these Yorkies are born with a combination of dark, tan, and white hair color. Parti Yorkies are purebred Yorkies, and they only differ by the shade when it comes to their looks. They won’t become bluish or slightly grey when they grow up. These tiny cuties remain three-colored dogs, although they can be of a much lighter color after birth.

Parti Yorkies were not recognized as equals for a long time. In North America, where Yorkies were starting to be popular at the beginning of the 18th century, only regular Yorkies were wanted and registered. At that time, even breeders put down the puppies who didn’t look the same as usual Yorkies, so when they saw the light-haired Parti Yorkies puppies, they would consider them non-purebred.

Only after 15 years, Party Yorkies were recognized in the American Kennel Club and registered as one of the variants of Yorkies. After that, they became more popular over the years. To conclude, Party Yorkies have the same genes as other sorts of Yorkies, so there’s no reason for considering them “low quality” Yorkies. Now, to the bright topics! 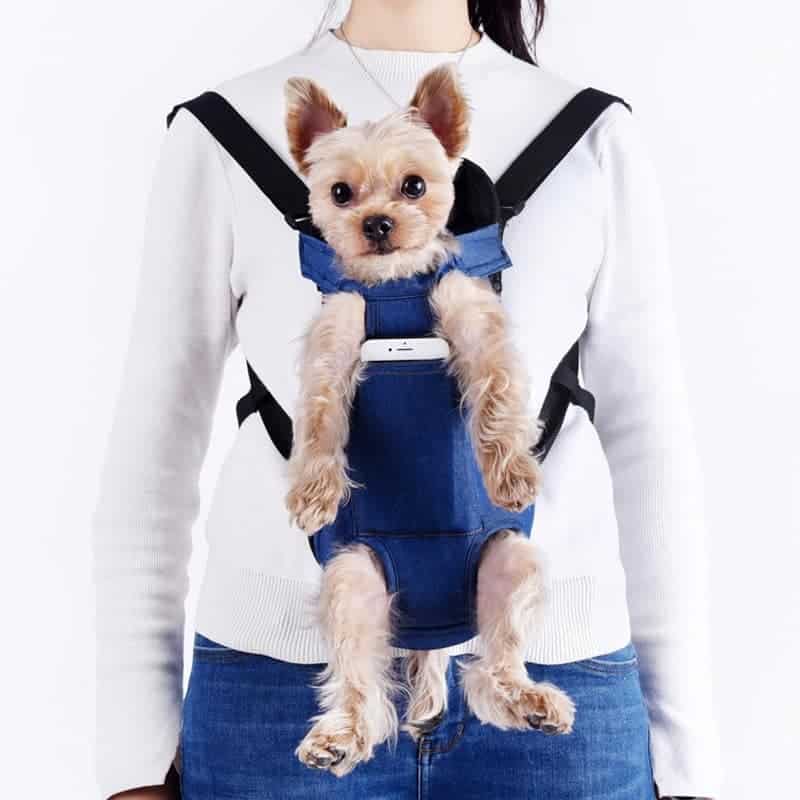 Yorkshire Terrier Carrier was created by Yorkie owners, for Yorkie and owners – to explore, travel, have fun, and grow closer all while being safe, comfortable and easy.

Do Parti Yorkies have health issues?

Yorkies are generally healthy and vibrant dogs with strong personalities and enormous hearts. They are prone to some health issues related to their sensitivity to cold. Yorkies are also prone to hypoglycemia, deficient blood sugar levels, especially while they are puppies. One of the Yorkie breed’s features is the danger of kidneys and liver failure and the development of gum diseases and other oral health problems. All of this information is entirely the same when we talk about Parti Yorkies. They have the same life expectancy, which is from 12 to 15 years.

To sum up, Parti Yorkies don’t have harmful genetic material that can cause any specific or severe health conditions. They are prone to all usual health issues like any other purebred Yorkie. Parti Yorkies’ personality is also the same as other members of this breed. They are cute firecrackers, very festive, and energetic dogs attached to their human family members.

How much does a Parti Yorkie cost?

Because of their misjudged reputations, there were times when you could get a Parti Yorkie for a drastically smaller price than other Yorkies. As we’ve already mentioned, today, professional breeders are aware that Parti Yorkies are the same, and so are the buyers. Parti Yorkies are entirely accepted and wanted on the market, which is reflected in their price. Therefore, the price is mostly the same for all purebred Yorkies, and it goes from $1200 to $1500, if you are lucky.

Today it is tricky to find a Party Yorkies that costs less than $1500 because breeders are very passionate about combining these Yorkies’ best genes. The fact that Party Yorkies are unique and in the minority than regular Yorkies makes them more expensive and intriguing. However, there are other reasons why Yorkies are expensive. Take a seat before you read the next sentence. There are specific family breeders present in the field for centuries, and Party Yorkies from their litters cost up to $10000! How time has a funny way of changing the societies’ perspective of dog breeds and the market price!

Of course, people are always willing to give away their puppies for free or put just some symbolical price. You can always try tracking them up in your environment or through social media and ads. 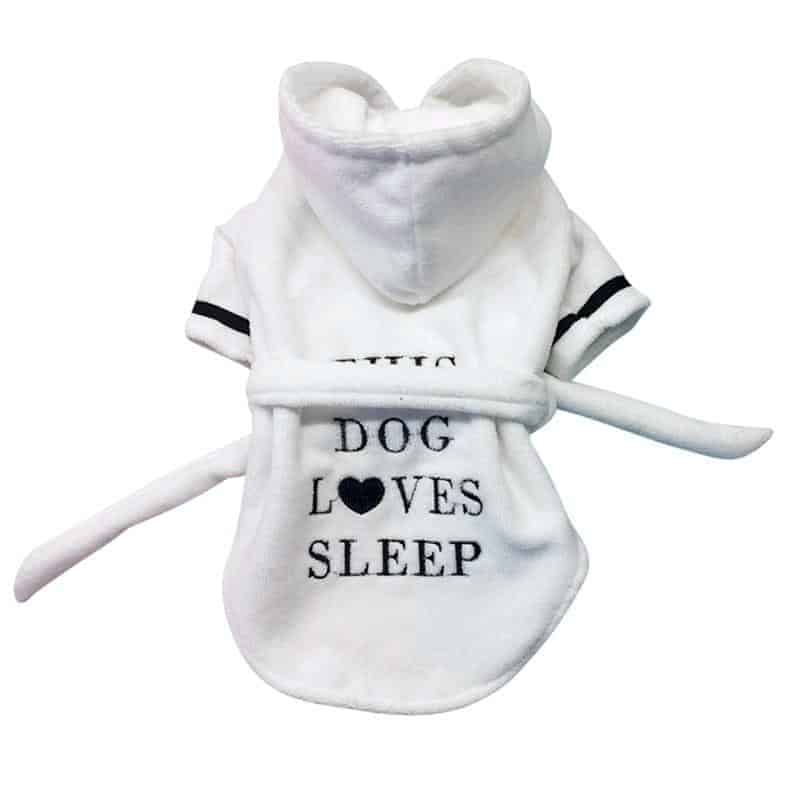 Get pampered with your pooch in the softest and most water absorbent bathrobe. Not only is it warm, this robe is a staple piece, a status quo, a “must have”!

What about their hair? Is there just a color difference or more?

Yorkies, in general, don’t have a typical fur like other dogs breed. Their coat is more similar to human hair, so it’s called that. Many hair appearance varieties can be curly, wavy, silky, straight, or even slightly changed when Yorkies get their ripe age. Party Yorkies have all these hair features except the white color, which comes in combination with dark and tan tones. Now, let’s get back to other differences in dogs’ fur and hair.

People usually think that Yorkies have hypoallergenic hair because they differ from other dogs when it comes to their coats. In other words, for example, families with children who suffer from allergies caused by dog fur hope that getting a Parti Yorkie will be a solution. Unfortunately, Parti Yorkies hair is not hypoallergenic, as well as other Yorkies. Having that in mind is essential if you have these kinds of health issues.

On the other hand, you may think that Parti Yorkies’ maintenance is somehow different from other Yorkies. Well, it’s not. The need for daily brushing remains with Parti Yorkies as well. You should also pay attention to their delicate skin, use good shampoos, and not bathe them too often. If you decide to grow your Parti Yorkies hair long, it will require more time and effort. It’s also recommendable to tie their hair, make them some functional hairstyles, and often cut the fine hair around their eyes. It can affect their sight and cause some eye infections. 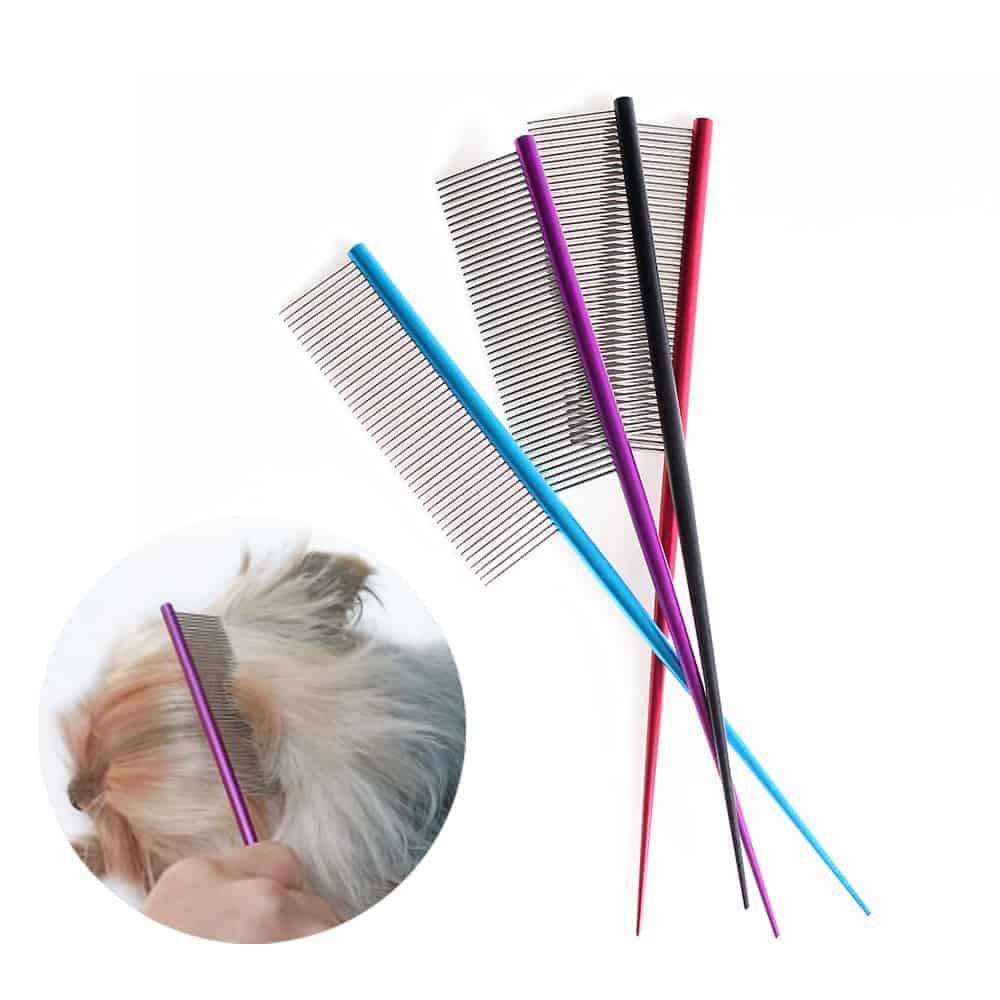 Brush your dog’s hair quickly, and it will become smooth in a matter of seconds. It is safe and it won’t scratch their little cute heads. On the contrary, it will give them a gentle massage.

You’ve probably already concluded that Parti Yorkies shed the same as other Yorkies. The only specific fact is that you can’t notice their shedding simply because they have different shed schedules compared to other dogs. Because their hair grows at the same rate during the year, shedding won’t be more visible to you in some specific months. You won’t have a problem with their hair flying everywhere, but brushing is a must to avoid any shed inconveniences.

At the end of this personal guide of all the facts you need to know about Parti Yorkies, there’s only one thing left to say. Whether your Yorkie is purebred, non-purebred, Parti Yorkie, or popular bluish Yorkie, love is essential for every dog. If you are a proud owner of Parti Yorkie, enjoy their uniqueness and personality. To all the potential owners of these three-colored doggies, congratulations! After reading this article, you’ll be ready for a mission of finding your perfect Parti Yorkie! Keep in mind that providing a healthy life and cozy home for our tiny furry fellows should always prioritize every dog owner.

Newer Purebred vs Non-Purebred Yorkies
Back to list
Older Do Yorkies do Better in Pairs?

Get a Little Closer

Tell us a little about yourself and get a sweet weakly email. Don't worry, it's FREE!

The biggest Yorkshire Terrier Community on the world!